Yet another ceremony. But this one snuggles up to close to our hearts, because it’s near and dear to where King of Tabanan’s son was healed, 5 centuries ago and why Bali Silent Retreat ended up in surrender to the spiritual powers that be. You can read below, in brief, about how 525 years ago there was an ashram in exactly the same place as the meditation octagon and the labyrinth at Bali Silent Retreat . . . and how we had no clue.

Or read a comprehensive version on web site’s History page. 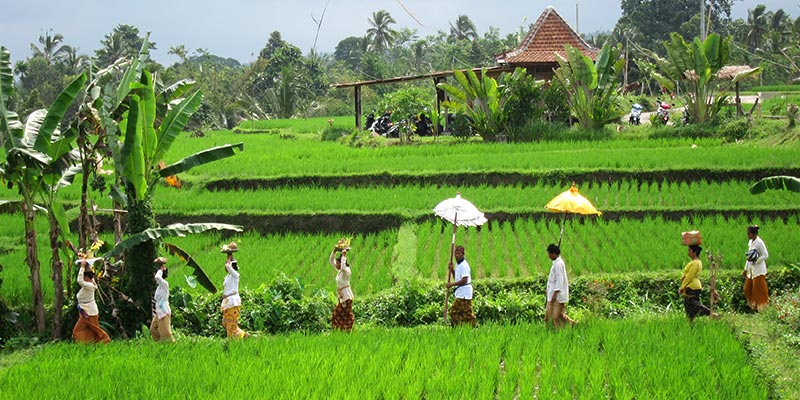 The family and village are walking past the Bali Silent Retreat Lodge to the holy beji (spring water) to collect holy water for ceremony for renovation of another holy beji (down the road) where the King’s son was healed of insanity, 525 years ago. 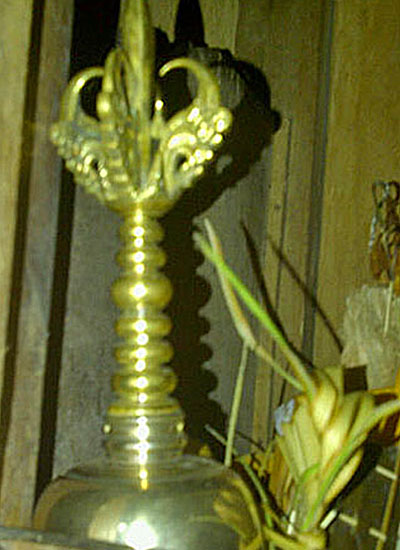 Original bell from 525 yrs ago, which calls for the spirits to assist and participate in ceremonies.

In 1487, a Tabanan King, Sri Arya Mur Makules, left his sons in charge of the palace while he went off for serious prayer (Samadhi) in the temple.

As soon as the tree hit the ground with a great big boom, the older prince, Sri Arya Ramong, fell terribly ill, mentally insane, and captured in trance, yelling and screaming.

All the royal Begawans (palace priests) tried to heal the son but failed, so the King went on a search all over Bali for a healer and heard about a Rsi Priest (a clan from the Waisnawa tradition) near Tanah Lot, who had psychic powers. 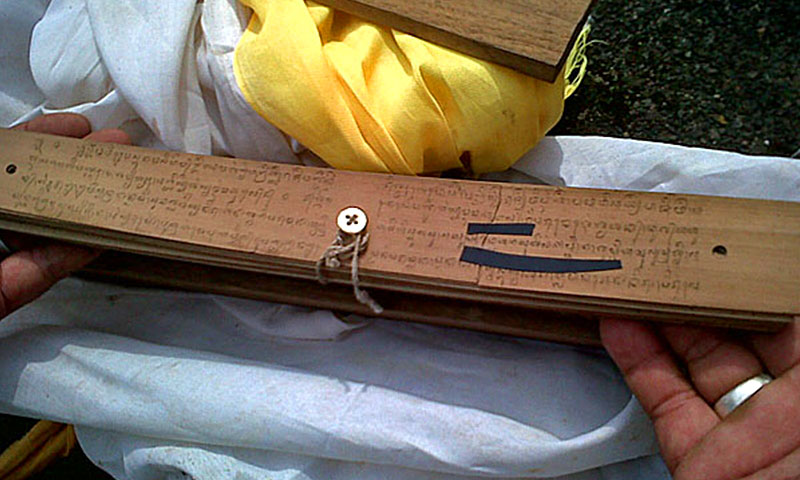 Lontar: Balinese history written with a knife on palm wood. Ash and dark vegetable stain are then scratched into the carved letters. Usually written in Balinese Kawi.

After all the proper rituals, the priest dropped into a trance, and saw a vision of Mt Batu Karu and a teak forest**.

So the King and son, et al, travelled north and stopped near the village of Penatahan and inquired where might be a good place to pray deeply in Samadhi. The residents, Akuwu people, said they were simple country people and the best place to pray was a short walk to the northeast to a holy rock, where they traditionally prayed. They accompanied the king to the place of the stone, where he meditated daily and Ramong began to recover. When finally Ramong recovered he didn’t want to go back to the palace but preferred to stay in the area and asked for village to be built, as well as, an ashram to study and pray.

A temple was built where Ramong was healed – Pura Batur. The priest built an ashram nearby, to the north, and the area was named Mongan with another temple for the ashram, called Pura Dalem Madia. The king gave 8 hectare of land to the priest with the stipulation he maintain the temples. The descendants of this priest are the family members who’ve partnered with Bali Silent Retreat Center, creating another ashram in exactly the same place, which we’ve designated for all religions, all faiths or just resting in the heart of nature.

* The Banyan Tree is considered a holy tree with special powers of conducting spiritual energy.
** There are teak trees in the Jungle Walk at Bali Silent Retreat.

We know where every bit & bite of our garbage goes. Do you?